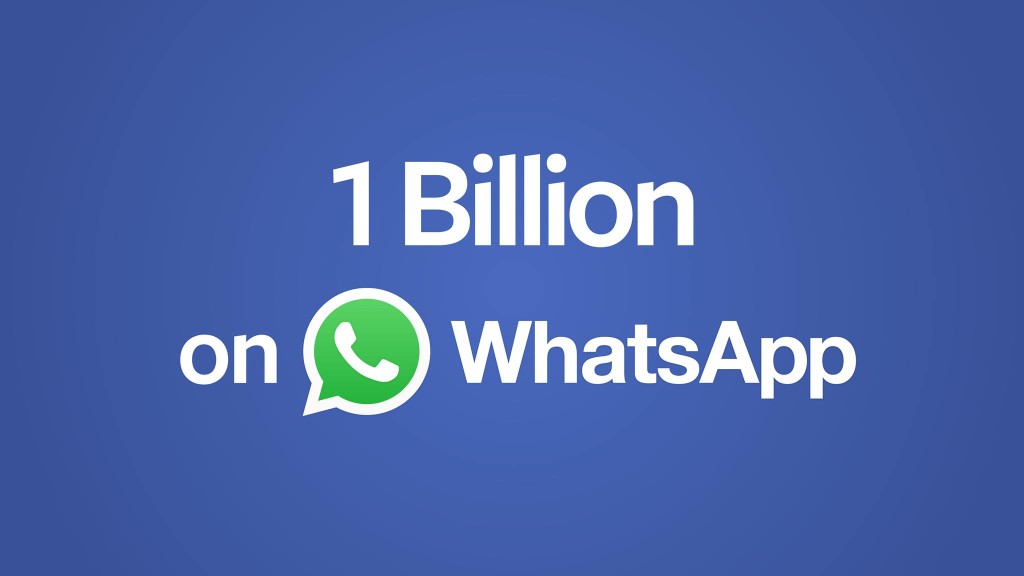 Congratulations and kudos to the WhatsApp team for achieving this remarkable milestone. The first messaging app/platform which has not been started by one of the internet giants but was born as a true startup.

I am stressing this despite no other messaging service, no matter if startup or bred by an existing tech giant, ever having reached this mark. Facebook Messenger, so to say the sibling service under the roof of Facebook, is closely behind WhatsApp, but then it had all the help and pushing power of the core Facebook service. The most significant support was certainly the forced de-coupling of core Facebook and Messenger and the need to install the dedicated app to continue using chat and messaging in the Facebook mobile experience.

So, why has of all things WhatsApp been the service to excel like they did? Apart from the Asia originated – and dominating in vast parts of this region – services like WeChat or LINE, why not kik, Viber, tango or maybe Skype, who had a head start of several years originating in the PC world (in my opinion that was a big burden for them, but that is another story)? I guess there is not one single best answer to that. For sure WhatsApp with its lean team has demonstrated a superb execution. Their focus on a clear cut, non bloated user experience, a non-prohibitive and easy to understand business model of very affordable $1/year (history by now [http://techcrunch.com/2016/01/18/whatsapp-free-business/]) in contrast to annoying advertising and/or premium content rip-offs have certainly helped succeed. And then there is the undeniable factor of “luck” and “being in the right place at the right time” which cannot be planned but, if happening, puts you on the fast-track for hyper growth.

My focus today though is not WhatsApp vs. other “over-the-top” messaging and communications players. It is on those players that have been whitewashed the most. Because the biggest slap in the face by this ‘1 billion active users news’, in my opinion, is into the face of telcos or mobile carriers. Mobile voice and text communication has been their home turf for the last 25 years. They have realized tremendous profits with their communications services for as long as these where safe behind a walled garden by strongly being tied to their dedicated network access. It is remarkable that telco execs and strategists have not seen the possibilities that have started to emerge around the 2007/08 timeframe. It seems on their side, these developments, which I will speak more about in the next paragraph, have obviously only been seen as threats. They have spent millions on consultants, analyses, studies. They have spent millions on technical and legal tweaks to prohibit and block 3rd party IP-based communications services in their networks. But where was the foresight – the connecting the dots for the good – that the future of communications, and the way it is produced, delivered, consumed and charged for would be radically different from how everything had started in the early 90ies?

Entrepreneurs and startups have defined a new communications world

Instead it was young entrepreneurs who have had the right strategic view of what had become possible by fortunate overlapping developments of some key underlying technologies. There was almost unlimited and affordable cloud-based processing power and storage to run largely virtualized services and functions on demand, remotely. There came the app store ecosystems which for the first time made it possible to have a central go-to-point for any kind of software to be easily installed on mobile phones (vs. clunky “how do I get users to my mobile site to persuade them into a clunky download process for my mobile app?”). There were fast enough mobile IP networks that could be used to deliver any kind of IP based service. There were social networks where word of mouth about new services could spread virally, lightning fast. There was a healthy venture capital ecosystem with enough money to fund all kinds of new communications services and that had enough perseverance to let platform services grow. So that these could focus on “first the users, then the revenues” – full concentration on growth. WhatsApp and its Jan Koum did everything right. And they even started relatively late in 2009, compared to other IP based communications services that had already been around a couple of years back then.

The dilemma of telcos (& big incumbents in general)

Back to the telcos and their missed opportunities. Imagine a telco would have had the guts to unbundle their communications services from their network access and started marketing those service to anyone? Why stick to such a limited offer model within your own technical network if you can address anyone; anyone in your country, anyone in the world? If they had come up with a new business model that would cater for an inevitable future where there are hardly any direct revenues from communications services, at least in the consumer business?

This is again a lesson, how big organizations, incumbents, are struggling to adapt to new circumstances that have been shaped by radical technological development and disruption. Generally it is already hard enough to introduce and embrace an innovation and change centric mindset and culture in large organizations whose business has been stable and steady for decades. In this particular case, a specific dilemma can be observed that has struck other industries as well (e.g. the photo/cameras/film). In order to get ready for the future and establish new services and business/revenue models that fit into a new market order, you have to sacrifice existing business, existing real and tangible revenues. In the case of telcos, this would have meant a ramp up of mostly or fully free of charge messaging and voice services which directly compete with and cannibilize the old cash cows. And all of that with the outlook, but not certainty that new platform type revenues would emerge on top of that.

Of course, even that would not have been the ultimate recipe for success. It is an undeniable factor that consumers love new, fresh and innovative brands vs. those established ones whom many people feel they have been paying too much money in the past. It was all set for new and agile players to take the lead and eat the telco business of consumer communications service. Hesitant attempts carried out by some telcos to launch their own IP-based “over-the-top” services were too late in the market or did not take place in the center of their attention. Telcos will have to focus on other revenue sources in a world, where consumer communications services will be largely free (at least free of charge in money terms… users pay with their data and spend money on value-added services).

Meanwhile, WhatsApp will strongly push forward towards the 2 billion threshold…